A small group of us gathered at 4pm in the lobby of the Marquette University Library to spend an hour praying for the end to the war in Afghanistan and Marquette’s support of the war. My role was to pass out Pray and Fast flyers to people entering or leaving the library. As I did I would say that we are praying for an end of the war and an end to Marquette’s support of the war. If I had enough time I would add: “We Are Marquette”, the cry of the crowd at sports events.

With our posters, flyers and banners we were trying to communicate this simple message that just like we say ‘We are Marquette’, we are responsible for the killing in Afghanistan.

Tonight I featured on this web site the article “The War is Killing Afghanistan’s Children. Enough!”. We are the NATO/ISAF armed forces that are targeting Afghan children. We are also the Afghan Children being killed.

Early this evening the State Senator Republicans voted, probably illegally, to strip State Workers of collective bargaining rights. Up to this point they said they needed to do this as part of a budget bill to protect the people of Wisconsin. When the people of Wisconsin did not agree they stripped it out of the budget bill and passed it in the Senate with eighteen Republicans voting yes and one no as the Democratic Senators are still out of state. People all over the State are rising up tonight and saying we are the people and you cannot walk over us like that.

We were a small voice crying out in our silent prayer today that we are responsible for the killing in Afghanistan, especially of children and need to stop it. Workers and middle class are crying out to the out of control State government to stop taking away our local control and rights. Yes, the children of Afghanistan, the State Works. We are Marquette.
More Pictures Below: 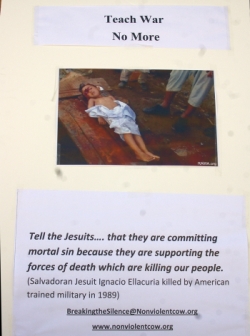 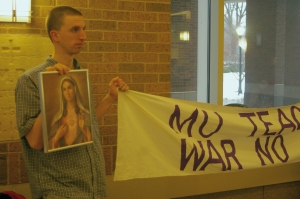 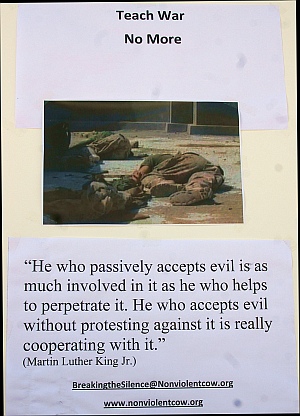