DiaryOfAWorm: Letter from Milwaukee County Jail, Part 2-"Do Not Turn Human on Me Now!" 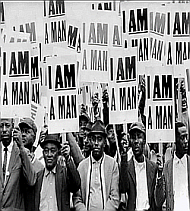 Memphis Sanitation Worker,
on strike in 1968

Part Two “Do Not Turn Human on Me Now”

A group of us, males, were not in a cell but sitting on benches in the main staging area for court. We were managing to find a little humor in our condition. A guard told us to be quiet or else she would feed us with some prison food, which looked, smelled and tasted like cow dung. I heard of this kind of food and asked her about the baloney sandwiches I received in jail in the old days. She said they still had them but this dung food was reserved for prisoners that were not cooperative.

New orders seem to come down and those of us on the two benches were put into one small holding cell. There was a concrete slab for sitting and a toilet behind a screen. There was not enough room for us all to sit so we took turns standing and looking out the window in the door to see what was happening.

I thought of my deceased son and one of his friends who had been held in padded isolation cells in the past, with nothing to do and food shoved under the door. I thought afterward that I should have asked for one of these types of cells, which I had written to the County Executive and Sheriff about describing them as ‘torture cells’. If a person did not have mental health challenges before going in these cells he or she would have one going out. My son was reluctant to describe the horrors of these cells and I was just talking last night to one of his friends who had been in such a cell for nearly a week and he did not even want to remember this torture chamber.

We knew we were in for a long haul when later in the night a deputy brought us each four slices of stale white bread and three very thin slices of something that could have been baloney. Many of us had not eaten anything all day so we ate them down. I made my sandwich into a triple-decker but without mustard or butter it was just stale bread with processed mystery meat. At least it was not the dung like meat we were threatened with.
During the course of the night some of us were taken out for processing, fingerprints, mugs shots and the rest. This is not necessary for people receiving citations but I guess the sheriff wanted to put on a good show of his power and might. The sheriff’s deputies really did not know who was in what cell so they would come to the door and yell a name in to see if the person there.

A few persons went out for processing but did not come back, so we thought they were being released. One of the deputies said we would all be processed first and since that would take so long, at the slow rate they were going, it would take until the next afternoon. Most persons in our cell did not believe him, especially when the young men in our cell, white or Latino, with no records, did not come back. However, the next day we saw some of them in the open unit or other cell blocks. During the evening there was just nine of us left and by early morning just seven.

When it came my turn to be photographed and fingerprinted I was given a list of stuff they had taken from me. I thought, since I already had my ticket, I would be released but I was sent back to the same old cell.

When people would leave the cell we would say “do not come back.”
Some of the deputies tried to make amends for the rough treatment we were getting and some did not care. One of the men in our cell had his glasses crushed when he was arrested, had a cut above his eye and needed his eyes washed out. He had asked for treatment but it was not until the middle of the night that he was taken out to the center room, put in chains, strapped in a rolling stretcher and taken somewhere. We thought he would get out but we saw him in the morning in another lockup with bandage above his eyes.

A young Latino, who I found out later on, had graduated from the same high school I did, Marquette University High School, had asked, since he had been arrested if he could call his mother to tell her where he was since he knew she would be worried about him. Every time a guard would open the cell he, backed by rest of us, would ask if he could call his mom. Once, when he was begging one of the deputies for a phone call to his mother, she said to him: “Do not turn human on me now!” A black middle age man in the cell asked her to repeat what she said. She just mumbled something like we are just “protestors.” When she left we all checked with each other to make sure what he heard was right. We all heard the same thing and a lively discussion of not being treated as a human being followed. Conscious or unconscious her statement really summed up the feelings in our cell. We were being treated as less than human beings. The Blacks in our cell understood this feeling more than the rest of us, old, young and white.

The incident reminded me of the 1968 Memphis Sanitation movement, Martin Luther King Jr’s. last march when the slogan of the black men striking was “I am a man”. Now I more deeply understood what I say when I am insulted or, worse yet, ignored. “I am a human being.”
We had a lot of good and lively discussions, filled with a lot of humor, the whole night long. We had a ‘dialog’ the whole night long, sometimes heated but also honest and respectful. It reminded me of the lively discussions my deceased son Peter and I had about religion and life. My wife would often tell us to “stop arguing” and we would tell her we were not arguing but just having a passionate discussion about our beliefs. Creative dialog and lively discussion seems to be a lost art in our society. Rather than dialog or discuss, people who disagree just say “that is your opinion and I have my opinion.” Values, morals and beliefs are sometime, I believe, more than opinions, but are matters of conscience.

On the Dontre Hamilton case we were all of one mind. Although we did not mean to get arrested we were okay to sit in jail in solidarity with Dontre and his family. On the power of violence vs. nonviolence we had some disagreements. Some felt violence was the only way things change and nonviolence only worked with sympathetic enemies. I did not agree and gave some examples from history but it was hard to disagree with the strong feelings some of these men had, based on their experience. We also were slightly in disagreement in our discussion about human rights when I said that a young child killed in Afghanistan was a human being. No one disagreed but felt there was no comparison to this case and an innocent child that was killed in a time of war. One white adult, experienced in fighting for human rights, kept saying there was no comparison because one youth was killed in war time and blacks are being killed on streets of our cities. I also made the mistake again of saying something critical about President Obama in front of African Americans. Some take any criticism of his actions, no matter what he does or does not do, as a criticism of him personally and of all Black people. Even Sheriff Clark, who was responsible for our arrest and who is Black, got off light compared to statements from the white Mayor or Police Chief. I found out later that Sheriff Clark was telling the media and people outside that we were ‘outside agitators’ and mobsters doing this for are personal gratification. Sheriff Clark is a Catholic who went to same high school as I and the young Latino in our cell. I need to be more sensitive when talking about Black leaders like Obama who does get called a lot of names and is disrespected because of the color of his skin by certain conservative white groups.

The people in the cell went from 11 to 9 to 7 by the morning. We thought those who left the cell were released. Also we wondered what happened to the people who were going up the other ramp, the North ramp. Were they all arrested? In the morning and after we got out we found out they were also ‘trapped on the ramp.” The difference was there was ground on the side of the north ramp which they could go down. However, as they tried to obey the deputies and police they were arrested, except for a small group of immediate family members of Dontre Hamilton, who were allowed to leave. We found out after we got out that persons not arrested and other supporters camped out all night at the County jail waiting for us.

I really felt bonded with those who were in our cell all night. Someone even joked about a one year anniversary next Dec. 20th. These men, young, old black, white, Latino are my brothers. I was released in one of the first groups of men, after most of the women had been released. When I heard about all the names we were called by the Sheriff, the Police Chief and the Mayor, all I could think of was that “I am a human being”. I am Dontre Hamilton.

My reflections of life and death of Dontre Hamilton are strong but will need to wait till another time. All I can say now is “Black Lives Matter”.

Retrieved from http://www.nonviolentworm.org/DiaryOfAWorm/20141224-LetterFromCountyJailPart2
Page last modified on December 26, 2014, at 10:56 PM