DiaryOfAWorm: Saying No To Those Who Think They Know Best 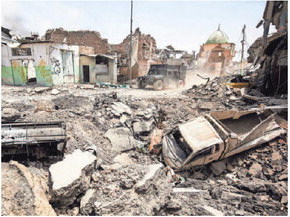 Damage done around the Al-Nuri
Mosque in Mosul’s Old City.

I recently read in the newspaper names of more homicide victims. According to Mothers against Gun Violence, who tracks all homicides in the City of Milwaukee, there were 78 at the end of June. In the newspaper I also read how the US Air bombing has intensified in the Old City of Mosul, Iraq. More civilians are being killed because unlike previous, aerial bombardments, citizens were not evacuated.

The killing of African American young adults in Milwaukee and the killing of civilians in Mosul remind me of what a Major in the Army said to a reporter after American bombs, rockets and napalm obliterated much of the South Vietnamese town of Ben Tre — killing hundreds of civilians who lived there. He said: “It became necessary to destroy the town to save it.”

In the City of Milwaukee City officials believe by capturing, imprisoning and punishing more young men they are saving the city from more crime. When it does not work they hire more police and do more of the same. Yet they ignore the known cause of crime and criminal, poor housing and education, extreme poverty and high unemployment. After 14 years of bombing and killing to “save Iraq” there is more death and destruction with no end in sight.

Why do some Americans believe they can capture, punish kill and destroy their way out of any situation when it fails over and over again to work.

We can say: “When will they ever learn?” or we can say they are smart persons and know but do the same for power, money and glory.

The belief that we know better or are exceptional drives the American mentality into more violence, more war and killing and more homicides. The better question is when will the people of America, right and left, liberal and conservative, Democrat and Republican, rich and poor come together to say No to the politicians who think they know best.

Retrieved from http://www.nonviolentworm.org/DiaryOfAWorm/20170705-SayingNoToThoseWhoThinkTheyKnowBest
Page last modified on July 06, 2017, at 12:18 AM