DiaryOfAWorm: Give No Air To Hate 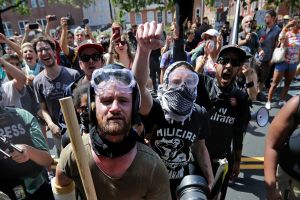 What would happen if the white supremacist, Klu Klux Klan and neo Nazi’s held a big rally
And no one but them showed up?
The media probably would not give the rally much attention.
And unless the hate groups broke the law the police would have an easy time.

What would happen if Trump tweeted and the media and Democrats did not respond?
The Tweets would become less meaningful.

During the last election President Bush was asked about an issue Trump was squawking about.
Though his spokesperson he said he had spoken about the issue during his presidency
And “won’t be weighing in anew now – or commenting on
Or giving oxygen to any of Trump’s bluster.”

I hate it when persons marginalize me by ignoring my words and message
But this might be the right tactic for “hate groups” or blusterers.

When I was a community organizer back in the 70’s I used to be glad and my job became easier
When a politician or official would publicly attack our leaders cry for justice.
They would organize the group better than I could.

Anti-hate groups give more coverage, creditability to the message of haters.
Reaction to hate gives the haters more say.