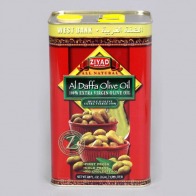 Last Thursday Pat and I were driving by our favorite Middle East Store and decided to shop. After getting some Pita Bread and olives we remembered we need some more olive oil. At the recommendation of one the Palestine brothers who own the store I have been buying Ziyad Al Daffa Extra Virgin Olive Oil. It was made on the West Bank in Palestine and according to the owner the ‘best.’ I could not find it on the shelf so asked him. He directed me to another brand of olive oil from Turkey. I asked him what happened to the best. Sadly they could no longer import this olive oil from Palestine. I knew what that meant and asked him how his family in Palestine was doing. He told me how hard it was for them and how they were losing hope. Israel with the aide of the US is slowly eliminate the Palestinians from their homeland.

When I got home I decided to look on the internet for what happened to ZIYAD. A web search came up with a few of sites that offered this olive oil. However, when I went to purchase it the sites said it was no longer available. The Amazon message was probably the clearest. It said: “Currently unavailable. We don’t know when or if this item will be back in stock.” I could not find out what happened to it but again I know.

Not finding what happened to this olive oil from the West Bank made me think of George Orville book 1984. This futuristic novel written in 1949 has the controllers of the country, Big Brother, with a special bureau that erase facts and change history on demand. The enemy one day can become an ally and a new enemy country is created. “Truth is Lies.” I feel Big Brother or Big Sister, the powers that be, have rid this Olive Oil from Palestine from us. With digital technology, they can do it quite easily. What was available one day, olive oil from West Bank is no longer available the next day. Big Brother says No to Olive Oil from West Bank.

Retrieved from http://www.nonviolentworm.org/DiaryOfAWorm/20180213-BigBrotherSaysNoToOliveOilfromWestBank
Page last modified on February 13, 2018, at 11:11 PM