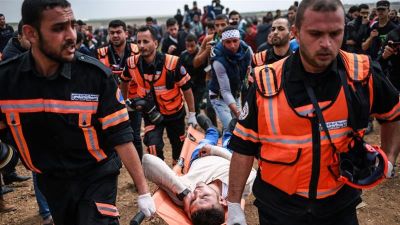 I woke up this morning, Good Friday, to the news that 15 Palestinians were killed and over 1000 injured as thousands of Palestinians conducted a peaceful march near the heavily armed fence near the border. They were commemorating Land Day when six unarmed Palestinian citizens of Israel were killed on March 30, 1976.

According to Israeli media, Israel’s army deployed more than 100 snipers on the other side of the border with permission to fire. This was the first of nonviolent protest leading up to Nakba, May 15. or catastrophe, referring the ethnic cleansing of Palestine and the near total destruction of Palestine in 1948. This ethnic cleansing of the Palestinian people did not start in 1948 and continues to this day. It is supported by the 10 million dollars a day in military aid that the US provides the Israeli military. The Israeli military also supports the Government of Myanmar who is conducting an ethnic cleansing campaign on the Rohingya people in their country.

As we remember the death of Jesus at the hands of the military we can mourn the killing and expulsions of the Palestinian and Rohingya people from their land. With our military support, the blood of these people is on our hands.