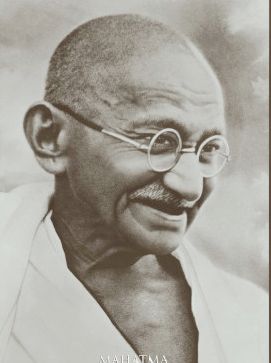 “Nonviolence is an active force of the highest order. It is soul force or the power of Godhead within us. Imperfect man cannot grasp the whole of that essence - he would not be able to bear its full blaze, but even an infinitesimal fraction of it, when it becomes active within us, can work wonders.”
- Mahatma Gandhi

First they ignore you

“Everyone in the world knows that Jesus and His teachings were nonviolent except Christians.” M. Gandhi

“The difference between what we do and what we are capable of doing would suffice to solve most of the world’s problems.” - Gandhi

“Joy lies in the fight, in the attempt, in the suffering involved, not in the victory itself.” - Mahatma Gandhi

“The means may be likened to a seed, the end to a tree; and there is just the same inviolable connection between the means and the end as there is between the seed and the tree……..We reap exactly what we sow.”
(Hind Swarj or Indian Home Rule by M.K. Gandhi, First Edition 1938.)

Enough but not Greed

“Earth has enough for the needs of everyone but not the greed of anyone.”
—Gandhi

My Life is My Message

“My Life is my message. You must be the change you wish to see in the world.”
—Gandhi

“Man for man the strength of non-violence is in exact proportion to the ability, not the will, of the non-violent person to inflict violence.”
— Gandhi on Non-Violence by Thomas Merton

“Organic manure ever enriches, never impoverishes the soil. The daily waste, judiciously composted, returns to the soil in the form of golden manure causing a saving of millions of rupees and increasing manifold, the total yield of grains.”

“Just as a tree had a million leaves, similarly though God was one, there were as many religions as there were men and women thought they were rooted in one God.”
—Harijan, 13–3−37 p. 38.

Retrieved from http://www.nonviolentworm.org/Main/QuotesFromMahatmaGandhi
Page last modified on November 09, 2017, at 12:35 AM