Introduction: “Separate but equal” was a legal doctrine in United States constitutional law that justified systems of segregation and racism. Under this doctrine, services, facilities and public accommodations were allowed to be separated by race, on the condition that the quality of each group’s public facilities was to remain equal. In the civil rights movement we became aware that the services, facilities and public accommodations were not equal for whites and African-Americans.

This policy was rejected by the US Congress and Supreme Court in 50’s and 60’s. However, when I went looking as to why so many Catholic churches were closed on the North Central area of Milwaukee this phrase came back to me. However, again Separate but Equal really means Separate but Unequal. Here is the brief story, as best I can tell it, of the Catholic Church parishes in the North Central area of Milwaukee. I tried to eliminate names of individuals since I believe “We the People” are the church and are responsible for what happened and to correct it. Our Catholic Church, Blessed Trinity, in North Central Milwaukee 1 was closed in June 2011. This left two so called ‘African American’ Catholic churches in the area and one on the edge of an area predominantly white. This closing rekindled my interest in a question I have had since our family returned to Milwaukee in 1995. Where have all the Catholic Churches gone in North Central Milwaukee? After all, Blessed Trinity was already a merger of three parishes and a Catholic Church had been located at this site since 1897. The two “African American Churches” left in our cluster parish group had been a result of a merger of nine Catholic Churches in 1995. One of those merged Churches was my boyhood parish. The simple answer given to my question about the disappearance of inner city Catholic churches is that only a small percentage of Blacks are Catholic. The North Central is the most segregated area of Milwaukee, 85% plus African-American, in the most segregated city in the USA according to the 2000 and 2010 Census. 2 However, that is too simple an answer. I knew there are other cities with large
African American neighborhoods that had thriving Catholic churches. Also, our church which closed did not have a majority African American population. Although small in members, Blessed Trinity had a good income from rental properties and was very active in the neighborhood. The church we were assigned to, St. Catherine, was an even smaller Catholic church with the same racial mix but at the edge of the North Central area and close to two predominately White, healthy Catholic churches.

A year or so later, an elderly Catholic priest told me that he was a young associate in the 60’s when the migration of African Americans to the industrial north side meant white flight. His pastor at the time wrote to the Archbishop about what to do about the changing population of the neighborhood around the church. He said the Archbishop wrote back to the pastor, telling him to “just stick with our people and let the rest (African Americans) go”.

At first I thought the decision to neglect the African American community happened about this time. But as I researched, I found that the notion of “separate but equal” toward African Americans was present in the archdiocese for a long time.

In the 19th century there was a small African American population in Milwaukee located in the downtown area. The church that black Catholics attended, Holy Name, merged with another Jesuit run church to form Gesu, a major church now on the campus of Marquette University. African American Catholics were welcome to attend the new church but were compelled to sit in its gallery. The impact of this racial discrimination gave impetus to form an African American Catholic Church nearby called St. Benedict the Moore Mission Church. The mission church was declared a “church without borders” so all African Americans could attend. The Capuchin religious order took over the church and built a new church as well as a day and boarding school for African Americans. The school grew and a high school developed. Graduates of the St. Benedict Moore Mission School entered professional careers in law, sports, journalism, politics and music. A hospital for African Americans was built near the Church to complement the mission the parish served.

Gesu parish also developed a school. The schools, one for whites and one for blacks, grew and flourished into the 50’s and 60’s when the number of children in the downtown area, African American and White, declined and the schools closed. However, both schools, Gesu and St. Benedict the Moore have extremely active alumni groups that meet yearly.

Despite all these great efforts to serve the African American community, the tinge of racism and paternalism by the Catholic Church could be discerned. In 1937 an African American woman wrote an article reprinted in the archdiocesan weekly newspaper asking the well-intentioned ‘liberals’ to stop the stereotyping of Blacks. She ended the article by saying, “And please don’t preach salvation to me on one hand…and then snatch the very bread out of my mouth with the other…. Don’t forget that I am a human being first and Negro second.” 3

African American candidates for the priesthood were told to look at religious orders if they had a vocation as opposed to attending the Archdiocesan Seminary. In fact, the Milwaukee Archdiocese did not have an African American priest until 1975.

Over the years, the African American populations in Milwaukee grew and expanded especially in the North Central area of Milwaukee where there were good industrial jobs available. Keeping African American Catholics out of White Catholic churches became more difficult.

In the 40’s when the Croatian Church, Sacred Heart, moved to its present location, there was another attempt to segregate African Americans into separate Catholic churches. At the abandoned location, 7th and Galena, the Archdiocese formed Blessed Martin De Pores Mission Church and asked the Capuchin religious order, same as at St. Benedict’s, to staff it. In 1955 the Housing Authority wanted to tear down Blessed Martin but the Archdiocese said no, wanting to keep Black Catholics separated. However, these efforts to keep African American Catholics segregated eventually failed. As more and more African Americans moved into the north side neighborhoods, a few Catholic churches welcomed them but most shooed them away to St. Benedict the Moore or Blessed Martin De Pores. Red dots are census
tracts below the poverty line

As the African Americans moved into the area White flight became rampant. With the loss of many industrial jobs in the North Central area it also became poorer and poorer. Where there once was a thriving economy, now the North Central area is the poorest area in the city of Milwaukee, which in turn is the fourth most impoverished city in the USA. 4 As African Americans moved into the North Central area and were usually not welcomed in most Catholic churches, the number of Black Catholics declined. Therefore, the existing Catholic churches declined in the number of parishioners as well as in income.

The Archdiocese made two more attempts in the 90’s to cut its losses and keep African American Catholics “separate but equal” from White Catholics. The first attempt was in 1993 when three predominantly White churches in the growing African American North Central area were asked to merge. These three churches, Holy Redeemer, St. Nicholas, and St. Albert’s were not near each other and the merger idea was not welcomed by the parishioners. Some say the Archdiocese said if they agreed to the merger they would not need to be merged again, as the population of the Catholics on the north side was declining. It was a bitter merger and the oldest church, Holy Redeemer, built in 1897 and once the largest Catholic church in the Archdiocese, was chosen as the site of the merged church. The name of this church was changed to Blessed Trinity. Many felt that St. Nicholas, the wealthiest of the three churches which also had a very active school, should have been kept open and been the site for the merged church. However, St. Nicholas was the most desirable site to sell and was purchased by an evangelical church for a good sum of money. The monies from the two closed churches were moved to the new church. Although many left the three Catholic churches during the merger years the surviving merged church of Blessed Trinity was left financially sound with income from the sale of properties of the two other churches and with good rental income from the closed school and convent on the site. 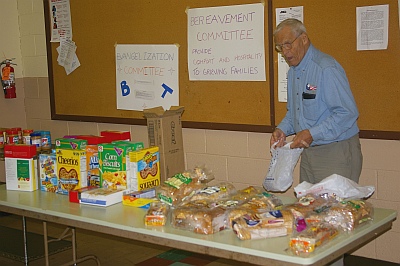 Blessed Trinity, although it grew smaller over the years, became a strong faith community and had a real presence in the neighborhood. The food pantry, the St. Vincent De Paul conference home visits, evangelization of the neighborhood, youth trips in the summer, environmental improvements to the buildings and grounds all were part of this development. In the meanwhile, St. Catherine parish, on the southwest edge of the North Central area was having troubles with a pastor and people fleeing the Church. Both churches got new six year term pastors in 2005. 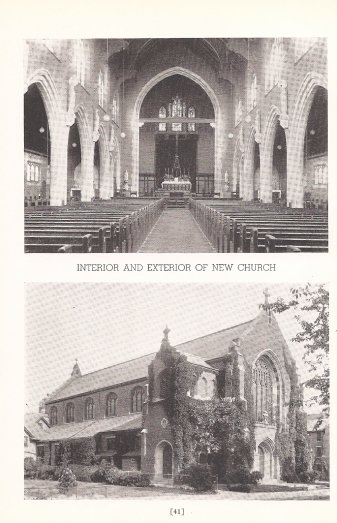 St.Thomas Aquinas Church one of the
nine Churches merged into two in 1995

Early in 2010 Blessed Trinity parishioners were unexpectedly told one Sunday the Archdiocese was no longer counting rental income or the funds from the two parishes that had merged with Holy Redeemer to become one in 1993. Unless there was a change we would be closed. The congregation was presented with six models to continue the parish. After an all parish gathering when the models were discussed there were some good ideas presented of how to grow and fund the church. Despite the enthusiasm and commitment of parishioners to keep the church open there were no results. Catholic churches in Milwaukee are owned by the Parish Corporation Board 5 which consists of the archbishop, president, pastor, vice president, the Vicar General, usually the auxiliary bishop and two lay trustees in the parish. The individual parish council of the church is only a ‘consultative’ group. 6.

In December 2010 the parish council presented a plan for ‘conjoining’ with another parish by 2012 to the Archdiocese. 7 In 2011 it became clear that the parish was closing, that there would be no priest assigned to the parish any longer and the church’s extensive property was up for sale.

So now, in the great North Central area, where in the 60’s 17 Catholic Churches 10 flourished, there are three Catholic Churches, the two African American churches of All Saints and St. Martin De Pores and the predominately White church of St. Catherine which is in the process of forming a strong union, eventually under one pastor and corporation council, with a church, St. Sebastian, outside of the North Central area. The conferences of St. Vincent De Paul were kept to the non-existent and outdated church boundaries thus leading to a lack of service and home visits to people in need. (See St. Vincent De Paul Stalled)

Separate but equal did not work in the USA and really meant separate but unequal. This understanding led to the civil rights movement that attempted to give the same rights of freedom, education, opportunity and health to all citizens despite race, creed or gender. These rights are still curtailed for some people but there have been great strides in the civil rights movement of minorities, women, gay,poor and the sick. However, there is still a long way to go. While other major cities like Chicago or Washington D.C. have flourishing African American Catholic Churches, the Milwaukee Archdiocese has struggled to keep the separate but unequal status and thus contributed to the segregation and poverty of the North Central area.

Retrieved from http://www.nonviolentworm.org/Main/TheCatholicChurchInNorthCentralMilwaukee
Page last modified on January 22, 2013, at 11:15 PM