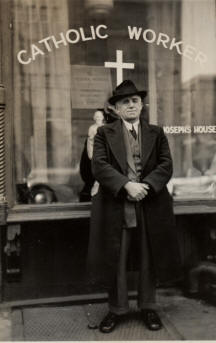 To blow the dynamite
of a message
is the only way
to make the message dynamic.
Peter Maurin

Letter to the Provost of Marquette University

Blowing the Dynamite, Part 3 What Would Dorthy Do?

Marquette is the Only One

Blowing the Dynamite, Part 4 How Dorothy Day came to accept the Laetare Medal

Sign the Open Letter to Four Leaders of Morality in Milwaukee to Close the base Schools of Army, Navy/Marines and Air Force at Marquette University.

Comments and Corrections to Blowing the Dynamite message.

On this page… (hide)

I just read your letter to the Marquette U. provost. We got rid of ROTC at the University of Southern Maine in 1995. The Faculty Senate recommended its closure because courses were of dubious academic merit but primarily because its rejection of gay students was contrary to University System policy (which breach the trustees refused to act on). The President closed ROTC down in the summer as economically a drag on the university. This got him a standing ovation at the Pax Christi Assembly in Gorham that summer (probably the only one he ever got). The program moved to nearby St. Joseph’s College, still accessible to USM students!

I was instrumental in bringing this off as chair of the Academic Policy Committee of the Faculty Senate. Many colleagues knew me as a pacifist but that never became a concern. We played it cool!

I wanted to offer a gentle corrective to one of your points in your last email. Dorothy Day accepted the Laetare Medal from the University of Notre Dame (I believe in 1973). Notre Dame hosted ROTC then and continues to host it today. It would be interesting to look up what she said in her Laetare Address. I’ll see if I can locate that somewhere.
(Ed note: Dorothy Day did receive the Laetare Medal in 1972. More research is being done of why she made this exception.)

Our Only Security is God

God is the creator and is the lord of history and the lord of the nations. Empires are the enemy of God because they attempt to usurp the power and prerogatives of God. The military is an Imperial manifestation of violence and terrorism and is completely contrary to the way of Jesus. It is through the military that the Empire maintains it’s wealth and power and does so by destroying people including children. “What you do to the least of these you do to me.” To maintain ROTC on campus is to engage in direct complicity in the murder of God’s children and is completely contrary to the way of Jesus and Yahweh. All of us have been complicit in this evil and we must all repent of it and choose God and not Empire. To choose Empire is to make ourselves enemies of God and puts our souls in danger. We must help each other to break our addiction to Imperial reality and live the new life that Jesus and Yahweh leads us into while we still have time left. This is the only way humanity can survive. Our only security is God. Don Whitman (Catholic Worker in NYC, 1978–81)

Retrieved from http://www.nonviolentworm.org/TeachWarNoMore/BlowingTheDynamite
Page last modified on December 20, 2010, at 09:24 PM