“Breaking the Silence” is a base community that seeks to practice our values and beliefs in everyday life and to break, by nonviolent action, the code of silence that has developed in our militaristic society. We plan to do this at home by working to To Teach War No More, for No More War Spending and to deepen a Spirituality of Nonviolence. For more information and to participate: email

We started in front of the Marquette University Raynor library, home of the Catholic Worker archives and where we had conducted a hour prayer vigil in the lobby during Lent since 2009. 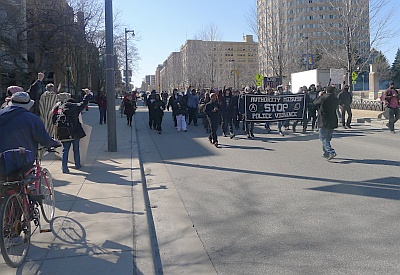 March down Wisconsin for
Derek Williams 2009 As we marched up Wisconsin Ave. on sidewalk we passed a group of Milwaukee citizens marching down Wisconsin Ave. on the street. They were protesting the lack of any charges against three Milwaukee policeman who neglected to call for help while a young African American male suspect with no criminal record died in the back of police car. Death marches up and down Wisconsin Avenue for Justice and Peace.

We Marched up Wisconsin stopping to read each of the 14 stations. We may one detour to the three schools of military on campus. Our Message was clear and out front. “On top of this, most of our universities and high schools train young people how to murder other people in an evil program called Reserve Officer Training Corp, or ROTC. This work goes against everything Jesus gave his life for, everything we stand for. While I was in Central America in 1985, Salvadoran Jesuit Ignacio Ellacuria talked about ROTC, ‘Tell the Jesuits of Georgetown that they are committing mortal sin because they are supporting the forces of death which are killing our people.’Strong He was assassinated in 1989.” (Father John Dear S.J. in National Catholic Reporter Online article — Jan. 8, 2008) We marched to Gesu, the Jesuit Church on the Marquette University campus that was built and dedicated in 1897 for whites only. (See Separate but Unequal at Catholic Church in the North Central Milwaukee. We prayed the Stations of the Cross, called ‘Jesus the Man’ and prayed and sung Marquette University hear the Message to Teach War No More. 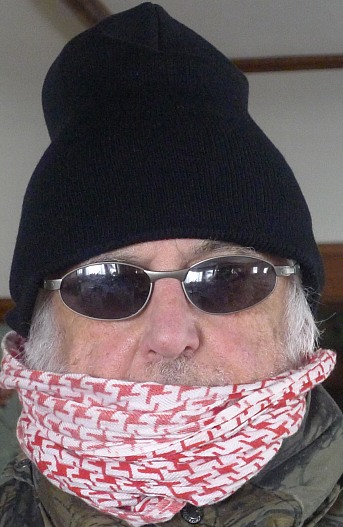 “Preach the gospel,
and if necessary, use words”
St. Francis of Assisi

Drone and Clowns Storm the Bastille “We have guided missles
and misguided men”(MLK)

Drones Do Not Clown Around

While clowns make us laugh drones, unmanned airplanes, kills people, many innocent children and adults. Yet while our politicians vote more money for drone warfare we ignore these deaths and walk around like clowns oblivious to this reality. We of hope to dramatize with street theater at a few major festivals and events this summer this sad reality that drones kill children while we ignore this indiscriminate killing of the innocent. We will dramatize a drone attack and than have people dress like clowns dance around the death scene, not noticing the deaths.

To do this, awareness of drone warfare and resistance to it we need your help. We need drone operators, victims of drones, clowns, flyer distributors, poster holders and more. We seek “fools for Christ” or “fools for peace.

“Large or small, drones raise questions about the growing disconnect between the American public and its wars. Military ethicists concede that drones can turn war into a videogame, inflict civilian casualties and, with no Americans directly at risk, more easily draw the United States into conflicts.”

Stations of the Cross of Nonviolent Love To End the War in Afghanistan

To Close the Military Schools on Marquette University Campus

Reflections and Pictures of the Stations of the Cross

Reflection from a Father of son going to war

Open Letter to Four Leaders of Morality in Milwaukee

Breaking the Silence Quotes and Links Hit and Stay is a feature-length documentary about the antiwar movement. It takes an in-depth look at the Vietnam War era activists who said “No” to war by attacking the Selective Service system and attempting to throw a wrench into the U.S. war machine. Hit and Stay will be the definitive documentary about the Catonsville Nine, Milwaukee 14 and the actions that followed.

Breaking The Silence, BTS, will be doing local nonviolent “hit and stay” actions to bring home their messages: Close the School of Army (SOA) at Marquette and No More War Spending.
For more information contact:


A summer of street theater and resistance

As our country suffers human disasters: conducts two wars and supports more war and military occupations; the oil spill in the Gulf of Mexico; the decline of our educational system; economic depression and increased poverty caused by greed, it is time to take to break the silence and resist. March This Summer to Break the Silence on the obscene amounts of US taxpayers money for war and the militarization of our education system. Taking a page from the families of the Missing in Latin America, Open Housing Marches and from SOAWatch we will take to the streets and sidewalks this summer at major events with a March to remember all the dead and suffering from our decisions at home to teach war and spend more money on war.

By marching for the missing, dead and suffering we hope to break the silence and make all of us realize that we are the ones that we are looking for to stop these disasters.

We will march a major public events. Join the March to Resist and Break the Silence at:

March after the liturgy for peace and justice Retrieved from http://www.nonviolentworm.org/TeachWarNoMore/BreakingTheSilence
Page last modified on March 30, 2013, at 06:36 PM