On this page… (hide) 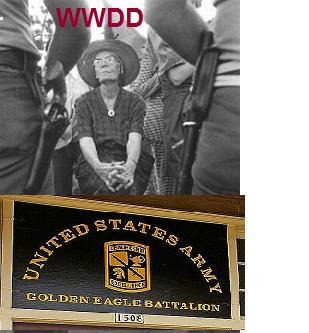 What is the story behind Dorothy Day accepting the Laetare Medal from Notre Dame?

Not Your Father’s or Mother’s Military

Today when military training hosted by Catholic campuses teaches the priority of military values and to kill reflexively it is good to ponder the words of Dorothy Day on the “priority of conscience” and how people need disturbing.

“My understanding of the teaching of the Church is that we must follow our conscience, even an erroneous conscience. My reading of Cardinal Newman confirms that. I think it is Boyer’s life of Newman that he quotes Newman as saying he drank a toast to conscience first, the Pope second.” (Catholic Agitator 1, no, 9, Dec. 1970)

“When it is said that we disturb people too much by the words pacifism and anarchism, I can only think that people need to be disturbed, that their consciences need to be aroused, that they do indeed need to look into their work, and study new techniques of love and poverty and suffering for each other. Of course the remedies are drastic, but then too the evil is a terrible one and we are all involved, we are all guilty, and most certainly we are all going to suffer. The fact that we have “the faith,” that we go to the sacraments, is not enough. ‘Inasmuch as ye have done it unto the least of these my brethren, ye have done it unto me’ with napalm, nerve gas, our hydrogen bomb, our ‘new look’.” (“Are The Leaders Insane?” By Dorothy Day, The Catholic Worker, April 1954, 1, 6.}

This first quote is from Dorothy Day’s “We Are Un-American: We Are Catholics” By Dorothy Day in the The Catholic Worker, April 1948, 2. Please read the entire article at Dorothy Day Library on the Web. I have substituted in parenthesis a few words that make the quote read like one written today.

“Some of us at THE CATHOLIC WORKER have been going to the colleges and distributing a leaflet against UMT (DMS) [Universal Military Training] (Departments of Military Sciences). And most everyone to whom we gave the leaflet has expressed acceptance of UMT (DPS), has thought it a good thing. There are no antiwar organizations in the colleges these days, at least not in the Catholic colleges. There is a sense of the inevitable, that war is to come, that morality has nothing to do with it, that it is a question of licking Russia (Terrorist) before she gets too strong, before she gets the atomic bomb.” “We Are Un-American: We Are Catholics” By Dorothy Day. The Catholic Worker, April 1948, 2.

Many colleges and universities desired to bestow on Dorothy Day during her life time honorary degrees. She respectfully refused such honors. Among her reasons for not accepting honorary degrees, especially from Catholic Universities, was her strong opposition to military presence and influence on campuses.

Below find excerpts from her personal letters declining these honors.

”… But I cannot accept the honorary degree you so generously offer. I have had to refuse two other honorary degrees from two other Catholic Colleges, (Jesuit and Christian Brothers) offered informally by telephone so that neither they nor I would be embarrassed. I am sure you understand, dear Fr. Colman, especially right now in view of our country’s involvement in Viet Nam, our opposition to ROTC and my own necessary involvement in civil disobedience, draft refusal (not draft dodging) etc.”

To the President of the Catholic University, April 22, 1971

“It is with all humility that I must refuse your generous offer of an honorary degree. The Catholic Worker stands in a particular way for the poor and the lowly, for people who need some other kind of schooling than that afforded by universities and colleges of our capitalist system. I have had to refuse seven colleges and universities for the reason they had ROTC and one way or another closely allied to Federal Government. In many areas they receive research grants many that have to do with war and defense.”

“… I cannot receive honorary degrees, and have refused others, for the simple but very deeply felt reason of my pacifism and my attitude toward the State, the ‘all encroaching state’ as the bishops have termed it. The existence of ROTC in the colleges and universities makes it impossible for me to accept. I realize that this is an extreme position, but I must take it, assuring you that I consider myself honored indeed at having a received such a letter as yours.”

“I wish colleges would stop offering me honorary degrees which I must in conscience refuse, but wish to refuse with all respect and gratitude. Whoever is responsible for making such an offer to me certainly knows nothing of the philosophy of the Catholic Worker movement, nor of its aims which are not only to treat all creatures as members of a family, but to so change society that we will be building that kind of society ‘where it is easier to be good’ –to use the simple words of our founder, Peter Maurin, a French peasant.”

Lewis University, a Catholic university in Chicago and a ‘partner school’ for the military, named a resident home after “Dorothy Day”. When Catholic Workers and the family of Dorothy Day found out they wrote the President objecting to the military offices in this building. This is the response to one of Dorothy Day’s granddaughters.

In respect to the request of you and your family, the ROTC program at
Lewis University will be moved to a different location. We are proud
that our new residence hall honors the memory of your remarkable
grandmother who so courageously fought for human and social rights
throughout her lifetime. Dorothy Day’s extraordinary dedication to the
poor and her tireless activism in pursuing peace and justice are a
legacy and inspiration to us all.

Retrieved from http://www.nonviolentworm.org/TeachWarNoMore/CatholicWorkersAndMilitaryTrainingOnCatholicCampuses
Page last modified on May 27, 2015, at 11:08 PM