TeachWarNoMore: Close Down ROTC At Marquette

Today, September 24th, is the 48th anniversary of the Milwaukee 14 nonviolent action to burn 1A a forced draft that forced young men and women to “kill or be killed.” September 22, 2016 14 persons, Omar, Don, Roberta, Tiffany, Bob, Harvey. Sue, Joe, Phil, Eugene, Tom, Sue, Jim and Don gathered on the Marquette University campus to close down the Department of Defense (DoD) new system to teach young men and women to ‘kill or be killed. Since before 1968, 48, years students, faculty, citizens have asked Marquette, a Catholic, Christian University to Be Faithful to the Gospel and Close Down the military, ROTC, NROTC and AFROTC DoD divisions on campus. 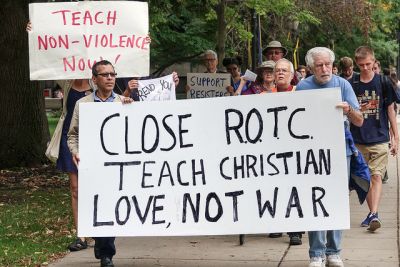 WE gathered on the campus for a rally reminding of us of how Pope Francis, Salvadoran Jesuit Ignacio Ellacuria, Ignatius, Founder of Society of Jesus, Jesuits, and the Gospel of Jesus Christ all resisted military training ‘to kill or be killed”. Harvey Taylor played the bugle and read a word poem and the March to Close Down ROTC marched through campus. At the ROTC building we gather in front of the doors. We symbolically chained the stores closed and called for the Closing of ROTC on campus.

After our gathering had ended a Marquette Police officer ran to the open doors of the building and tightly handcuffed Don Timmerman who was standing next to the door with a chain in his hands. Another Marquette Police officer appeared and yelled at rest of persons to disperse or be arrested for trespassing. As we left one young woman in the group was startled by armed police man and hesitated for a second before she tried to leave. She with Don was handcuffed and arrested.

Both were taken the Marquette Police station on campus. After a while the young women was ticked for trespassing and released. She had be traumatized by the police action. Don was kept at the Marquette Police Station and the tightness of his handcuffs was so severe that he lost feeling in one hand. An ambulance was called and he disappeared for a while. In the early evening, after many tries, Roberta, his wife, was able to locate him in the Milwaukee County jail. Around 1am the next morning she was told she could come down to jail to bail him out. At about 4am in the morning Don was released on $150 bail. For this peaceful protest on the Marquette campus he was charged with disorderly conduct.

Speaking for myself, Bob Graf, a member of the original Milwaukee 14, I am more determined that we need to renew our nonviolent efforts to Close Down the Military presence (ROTC) on the Marquette Campus. Next time we take an action to stop teaching persons “to kill or be killed” we will have 114 persons telling Marquette to Be Faith to the Gospel and Be Faithful to the Gospel.

Retrieved from http://www.nonviolentworm.org/TeachWarNoMore/CloseDownROTCAtMarquette
Page last modified on September 24, 2016, at 06:07 PM