St. Ignatius surrenders
his weapons at shrine
at Montserrat Forgive us, friends, for disrupting your daily routine, but the times are extraordinary in their capacity for violence and death. A malignant “patriotism” smothers the voice of reason, killing tens of thousands of civilians in Iraq and Afghanistan in order to protect us from weapons that did not exist, and justifies the torture of prisoners. 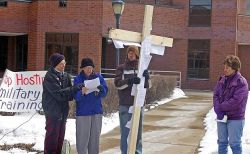 Reading the names on petitions

The trail of blood and death starts at various Pentagon branch offices, and particularly here at Marquette’s Departments of Military Science, which prepares young students and scholars to give up gospel values — and the notion of ‘cura personalis’ — in order to pledge obedience to military values, and prepares our young people to spill more blood with more unholy violence. 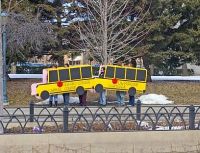 Students are bused in for
military training at Marquette

Killing is an abstract concept to students now, but no training, however scientific or sophisticated, can prepare young students for the evil that is inherent in killing other human beings and its haunting aftermath.

In 1918, swept up in a fever of patriotism, Marquette strayed from the vision of founder Ignatius Loyola, an ex-soldier who laid down his sword, confessed his wrong-doings, and lived out a life dedicated to the gospel. As the drums of war beat louder and faster than ever before, Marquette established an Army Student training Corps, known today as the Department of Military Science. Young men from across the nation boarded buses and headed to Milwaukee, Wisconsin. They arrived at Marquette where they started learning how to use weapons to kill and fight. The basic tenet of humanity, to love one another, was trampled. 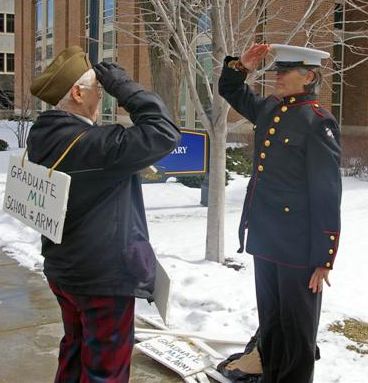 Realizing the dangers of the Military-Industrial Complex, people across the nation began rising up and questioning whether our schools should teach our students how to kill and die.

The Vietnam conflict heightened people’s awareness. People of conscience from around the nation started demanding that Universities renounce their ties with the Military.

As UWM, Carrol, and six other local universities and colleges realized that hosting ROTC was contradictory to the mission of a university, they out-sourced the teaching of war from their classrooms to Marquette’s.

During this period of forcing the military off campuses nationwide, Marquette University “missed the bus,” and reaffirmed its commitment to ROTC involvement, by adding Air Force and Marine programs to the Army and Navy programs already in place. Outraged and in numbers, faculty, staff, and people of peace mobilized on Marquette’s Campus demanding the University listen to Jesus’ last command to Peter to put away their swords.

Today, visitors to Marquette realize that the University strays further from the gospel. Students from Marquette and the neighboring university engage in battle simulation on campus. 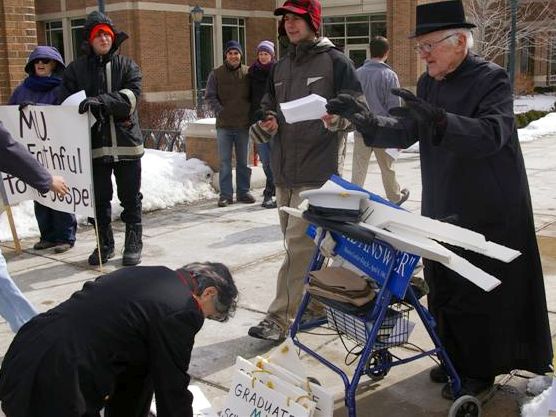 St. Ignatius blesses a solider
surrendering weapon as he did

The students, staff, and community challenge Marquette to remain faithful to the gospel, to live out the message of St. Ignatius, and no longer host the departments of military science. 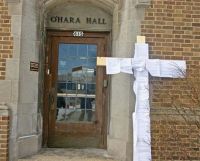 Cross of Petitions at door of MU administration offices

This script is written by Patrick Kennelly MU ‘08 graduate

Retrieved from http://www.nonviolentworm.org/TeachWarNoMore/March8th2008Marquette
Page last modified on March 20, 2010, at 03:21 PM