TeachWarNoMore: One Less Excuse for Marquette University to Host Teaching War on Campus 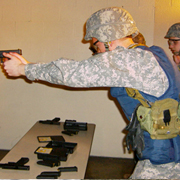 Many years ago when I started to question the military training programs at Marquette, Catholic Jesuit university, a friend, close to the Society of Jesus, told me that it was better for military officers to be trained at a Catholic Jesuit university since then we would have military officers with a good Catholic Jesuit education. At the time, thinking it sounded like a case of “end justifies the means”, I dismissed it.
However, a few years ago the past president of Marquette University, in an email to me, brought up the same reasoning: “To my thinking, it is tremendously beneficial for our military to have amongst its leader’s men and women who have the benefit of a Catholic, Jesuit education. In other words, Marquette ROTC alums provide a leaven for good in our military.” 2 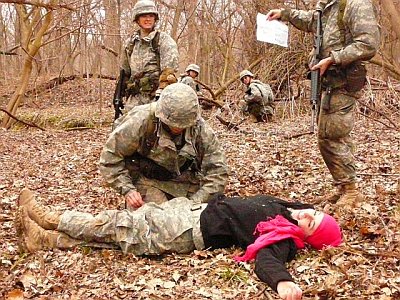 I tried to communicate to him and other officials of the University the many academic, ethical and moral reasons, like Army teaching military values supersede religious values or conscience; 4 and the teaching of what the military calls ‘reflexive killing’, killing without conscience.5 An ethics professor at West Point described this new way of killing as conditioning “soldiers to act reflexively to stimuli—such as fire commands, enemy contact, or the sudden appearance of a “target”—and this maximizes soldiers’ lethality, but it does so by bypassing their moral autonomy.” 6 Soldiers are conditioned to act without considering the moral repercussions of their actions; they are enabled to kill without making the conscious decision to do so.

Our Gospel and moral arguments like the ‘priority of conscience’ and not justifying ‘reflexive killing’ have been ignored by the local administration. Finally by sitting in the new President’s office we were able to get a brief meeting with the new president of Marquette University. We came prepared with our moral and Gospel arguments against teaching war at the university in the three departments of military sciences the university hosts. However, before we could present our case the new President, a Jesuit, brought up the tired old argument that it was better that military officers be trained at the school because they would get the benefit of Catholic, Jesuit education. We had some questions based on Christian moral and Gospel values 7 which he refused to give a clear answer on.

After the meeting, I decided it was time, once and for all, to retire this tired question of “is it better for military officers to be trained at a Catholic University?” This argument is false, invalid and should not be used for teaching war at a Catholic Jesuit university or any Christian university. In other writings I have pointed out how this is ‘Not Your Father’s or Mother’s Military’ but I had never directly dealt with this reason for military training on a Catholic Jesuit university.

Since World War II the military has changed its training, introducing things like “reflexive killing” which changed the number of soldiers firing their weapons from 25% in War World II to 95% in today’s wars. After the selective service draft system ended in the early seventies, the military was forced to make more adjustments in recruiting and training military officers, using money, honor, educational opportunities, and patriotism. 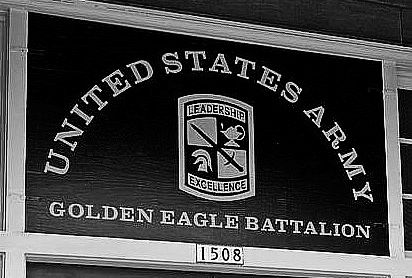 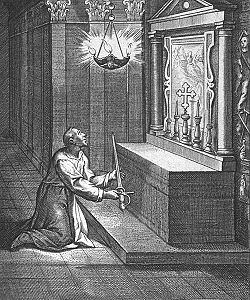 St. Ignatius surrendering his
weapons of war at Montserrat.

Simply said, a Jesuit Catholic University student could get the full advantage of being at a Catholic University while taking his military training at a nearby college, university or military facility. They would get the financial benefits of ROTC, a good Catholic Jesuit education and academic credits for military training. The Catholic Jesuit University, like Marquette, could keep all its federal funding under the Solomon Act; thereby, Marquette University would not have to teach values contrary to Christianity and be faithful to the Gospel. It would be a win, win situation for all.

But, maybe there are more financial benefits for Catholic Jesuit Universities than they will admit to for hosting military bases on campus. Dose Marquette get extra money for being a base School of Army, Navy/Marines and Air Force? There is no evidence of significant funds for being a “host military school” but, then again, the files and contracts with the Department of Defense are sealed and off grounds to public view.

When we were asking the president our two questions 10 on Christian morality and military training on campus, he said there is no direct teaching in the Church about not having ROTC on campus. That is true, I guess, but the tradition of the Catholic Church and the Society of Jesus has a lot to say about the ‘priority of conscience’ and killing. However, the excuse of getting a good Jesuit Catholic education for military officers is no longer valid.

3 Creighton University Army ROTC Blackwolves Battilion This name stems from the family coat of arms of St. Ignatius of Loyola, founder of the Society of Jesus. (↑)

7 Is it moral for the US Army to teach that military values take priority over Christian values and conscience? Is it moral and according to Gospel for military to teach at Marquette University to teach reflexive killing? (↑)

10 Is it moral for the US Army to teach that military values take priority over Christian values and conscience? Is it moral and according to Gospel for military to teach at Marquette University to teach reflexive killing? (↑)

Retrieved from http://www.nonviolentworm.org/TeachWarNoMore/OneLessExcuseForMarquetteUniversityToHostTeachingWarOnCampus
Page last modified on January 29, 2012, at 08:40 PM