Marquette is on the hot seat for rescinding job offer to lesbian. Marquette University claims it was not discriminating but that withdrawing the job offer had to do with some of her published writings “related to the ‘Catholic mission and identity’ of Marquette”. However, Marquette set listening sessions for next week on this issue

After reading in the newspaper Fr. Wild S.J., president of Marquette University stating that Marquette did not withdraw the offer due to “sexual identity” and would never discriminate based on sexual preference I had to write this open letter to him. 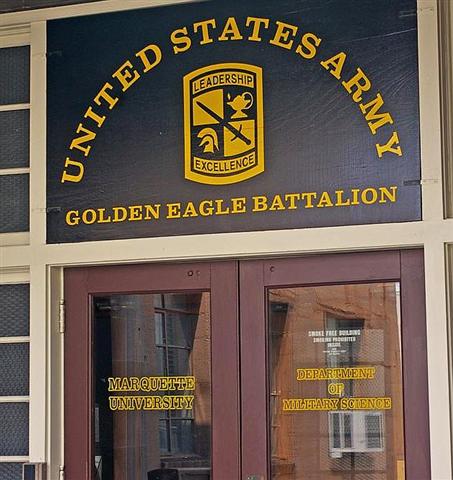 No Gays or Lesbians
Allowed in the Golden
Eagle Battalion

I was interested in reading your comments in today’s Milwaukee Journal Sentinel that Marquette does not discriminate based on sexual identity.

This discrimination may be legal under the “Don’t Ask, Don’t Tell” legislation but it certainly violates Christian principles.

There are many moral, ethical, discrimination and academic reasons to close the base schools of the army, navy/marines and air force hosted at Marquette. A few of us have for years been arguing the moral and ethical reason for closing these accredited departments down at MU, teaching military values and rules of engagement in war that are contrary to our Catholic faith. Perhaps we should have been stating academic and discrimination reasons.

Although all, but pacifist colleges and universities, are obliged by law, the Solomon Act, to offer military recruitment and a ROTC program, only a very few, like MU, freely choose to host military science departments on campus. Most, for moral, ethical, academic and discriminatory reason send the students off campus for military training.

At the end of the school year in 1968 many students protested the institutional discrimination of minority students at Marquette. The university heard the student and faculty cries and in the next year instituted the Education Opportunity Program at MU.

Hopefully you can listen to faculty and students again this year and eliminate all forms of discrimination on campus.

Retrieved from http://www.nonviolentworm.org/TeachWarNoMore/OpenLetterToRevWildSJOnDiscrimination
Page last modified on May 09, 2010, at 02:34 PM