“I have long since come to believe that people never mean half of what they say, and it is best to disregard their talk and judge only their actions.” — Dorothy Day, 1952

A small group of us have been silently witnessing on the Marquette University (MU) campus each Wednesday in Lent behind a sign saying: “MU Teach War No More.” Although our sign and flyer clearly state we are silently praying for Marquette to stop teaching war, students and faculty usually assume we are protesting the ROTC program on campus. We are not! We are making a distinction between the presence of ROTC as an academic program, and the teaching of military values on campus. In doing so, we are making the same distinction that 13 other local colleges and universities have made locally, and that such national institutions as Harvard and Columbia University have also made. 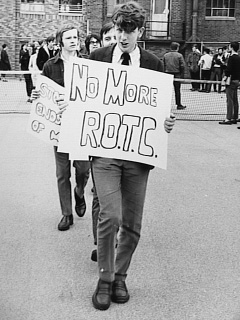 Back at the beginning of the resistance to the military on campus, in the fall of 1968 during the Vietnam War, “a key target was the Reserved Officers Training Corps…” 1 However, over the last few years of our resistance a new, research-based understanding of war and values contrary to our faith has emerged in our resistance to military training on campus. It started with a nonviolent action in the fall of 2007 commemorating the beatification of Blessed Franz Jägerstätter. Franz was martyred for his “belief that to participate in any form in an unjust war was to cooperate with evil.” He resisted cooperating in any way with the German military despite “his parish priest and local bishop telling him that his duty was to serve his country and preserve his own life for the sake of his family.” 2 Additionally, Blessed Franz withstood pleas from his family, the cardinal and even the German high command who tried to dissuade him for fear that his example going public would have an adverse effect on their authority.

This was much the same posture that modern-day martyr Salvadoran Jesuit Ignacio Ellacuria took in 1985, when talking about ROTC he told John Dear S.J.: “Tell the Jesuits of Georgetown that they are committing mortal sin because they are supporting the forces of death which are killing our people.” 3

We began to realize that the real immorality was not the ROTC programs themselves, but the fact that Marquette, a Catholic Jesuit University, hosts four departments of military science on campus that teach war and military values contradictory to teachings of the Catholic Church and most religious faiths. The curriculum of these four departments, unlike the rest of the curricula at Marquette, is not subject to review by Marquette University. 4

To understand how this came about, we need to go back to a time in the ’70s, after the Vietnam War and the Selective Service system ended. Many colleges and universities sought to rid themselves of military recruiting and military training programs. However, a few like Marquette decided to add more military training programs. In fact, the president of Marquette University states: “During the Vietnam War, many universities yielded to the pressure put upon them by those who opposed that war and made the decision to close their ROTC programs. Marquette did not follow that path but instead remained committed to our long tradition of ROTC involvement, even to the point of adding an Air Force program to the Army and Navy programs already in place.” 5 (Marquette also has a fourth department of military science, the US Marines.)

Despite the welcoming of the military training on campus by schools like Marquette, the number of schools of higher learning allowing officer military recruiting and teaching war on campus continued to decline. Finally the government was compelled to act and passed the Solomon Amendment. It was first adopted in 1994, expanded by Congress in 1997, and upheld by the Supreme Court in 2006. The Solomon Act allows the Secretary of Defense to deny Federal grants and access to federal contracts from the U.S. Department of Education, Defense, Health and Transportation and National Nuclear Security Administration to any college or university that does not allow military recruiters access to its campus and students.

In more recent times, full access to military recruiters in high schools was established by congress in laws like “No Child Left Behind.”

Now that schools of higher learning were forced to open their schools to military recruiters where were these students to be trained? They could have been sent off-campus to military training centers in the area and given academic credits by the college or university. However, that process would have denied the military and the wars they were engaging in credibility and support they desperately needed with a voluntary military and morally questionable wars, values, rules of engagements and training tactics. This is where Marquette and other schools open to military training came in. Marquette became the base school for the Army, Marines, Navy and Air Force for fourteen local colleges and universities in the greater Milwaukee metro area including itself. Students are bused to Marquette from 13 cross-town universities, private and public, to take military training on campus with such courses as “Principles of War” being offered. They are given academic credit for the course from their college or university, and graduate not only with an academic degree but as an officer in a branch of the military. Marquette’s school of the army calls itself the Golden Eagle Battalion of the United States Army. After graduation from their respective colleges students are sent as officers to fight in the present wars in Iraq and Afghanistan, even though their Church may consider some of these wars “illegal, immoral and unjust.” There is no selective conscientious objection once one is in the military.

With schools like Marquette hosting departments of military science, other schools, like the University of Wisconsin-Milwaukee locally, or Harvard University nationally, can offer military recruiting and military training, receive Federal funds, and still claim not to host military training and the teaching of war on campus. Marquette University refuses to answer the question of how much additional Federal money Marquette receives for being a base school for the military in the region. Those of us working for Marquette University To Be Faithful to the Gospel 6 and not host departments of military science on campus have tried to discuss and dialog with Marquette officials concerning our position that to teach war and values contrary to Catholic faith on campus is immoral. The President of Marquette University has maintained consistently a position that “no dialog is possible” on this issue. We have pointed out to administrators, faculties, the board of trustees, the director of the Center for Peacemaking and the Office of Mission and Identity how military values, like that of conscience, taught by the military at Marquette violate the teachings of the Catechism of the Catholic Church and the Gospel, but to no avail. 7 Even when the President of Marquette agreed to allow an open and honest debate on campus on this moral issue, other administrators refused to let the debate happen. 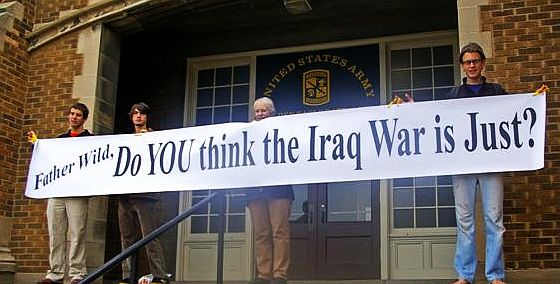 For the most part those opposing the teaching of war on campus are ignored by administrators, faculty and most students at Marquette, and when they do respond they falsely claim we are trying to deny students opportunity to be in ROTC at Marquette. When asked if the War in Iraq was a just war or not the President of Marquette refused to respond. When the Director of MU Center for Peacemaking, a Jesuit, was presented with the analogy of Marquette hosting an abortion clinic of Planned Parenthood to Marquette hosting the military to teach war he responded: “Pretty much everyone agrees that abortion is wrong. It would not be a problem to summon up a massive community resistance to such activity. On the other hand pretty much everyone agrees (for various reasons) that it’s really good that ROTC is on campus.” 8 Even if morality and ethics were based on majority opinion, he would still be avoiding the point that it is not the ROTC program, but the teaching of war and military values on campus, that is being objected to, just as performing abortions on campus would be (while some at MU may possess a pro-choice position).

This season of Lent we decided to turn to prayer and fasting to make our message clear. Every Wednesday for one hour in a public place on campus we stand in silent witness behind a banner saying: “MU, Teach War No More.” Borrowing an Ignatian idea, a MU student suggested we title our flyer: “Marquette You Can Not Serve Two Masters” 9, with examples of the conflict of moral teachings on the flyers.

Ash Wednesday, the first Wednesday, found fourteen of us in the lobby of Raynor Memorial Library at the main entrance. First a security officer told us that we did not have a permit to protest and would have to leave. A spokesperson with us said we were not protesting but silently praying. The security officer called his superiors and the Milwaukee Police Department. The police officer told us he would have to give us a ticket for trespassing if the authorities would not allow us to silently pray in the lobby. Security checked with administration and it was decided to let us pray publicly. Now there is only one security officer assigned to watch us silently witness to teaching war in school at various places on campus. Marquette, by ignoring this nonviolent action against University rules, has taken “ignoring” this moral issue to new heights. We will now need to evaluate how to lift up our nonviolent action and how to “speak truth to power.” 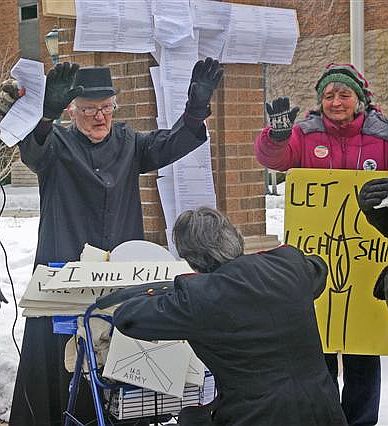 Skit of soldiers laying
down weapons at MU

We believe that Marquette students, like the students from the thirteen other universities and colleges that participate in military officer training, should be allowed to have access to military officer training and scholarships. Also, Marquette should be able to open its campus to military recruiting and make available military training like the other thirteen area schools. Thus, MU would still be eligible for Federal Grants under the Solomon Act. We have taken this message to the administration, board of trustees, faculty and student body but for the most part have been ignored.

Over the last few years Marquette, while ignoring this moral issue of training for war on campus, has escalated its talk of peace and peacemaking. MU, to its credit, has established a Center for Peacemaking which has brought in many good speakers and held retreats and other events on Peace. However, this is where the quote above from Dorothy Day enters the picture. “It is best to disregard their talk and judge only their actions.”

In the parable of the “Judgment of Nations” in the Gospel, 10 Jesus makes it clear that governments and institutions would be judged not by what they say but by what they do. If Marquette really wants to “make peace” it needs first “to stop teaching war.”

6 Marquette, Be Faithful to the Gospel, No Longer Host the Departments of Military Sciences (↑)

Retrieved from http://www.nonviolentworm.org/TeachWarNoMore/ToMakePeaceStopTeachingWar
Page last modified on April 06, 2010, at 10:00 PM