TeachWarNoMore: What is the Story Behind Dorothy Day Accepting the Laetare Medal from Notre Dame

Dorothy Day accepted the Laetare Medal from Notre Dame despite, what she described as her “abhorrence of our military-industrial-agricultural-educational-complex-conglomerate.” When I wrote the Letter to the Provost of Marquette University I mentioned that Dorothy Day did not accept honoree degrees from Catholic Universities that hosted military office training programs, ROTC. Someone in the Catholic Peace Fellowship, located in South Bend, the home of Notre Dame, wrote me back gently reminding me that Dorothy did receive the Laetare Metal from Notre Dame which did host, in 1972, and present hosts ROTC. Although the Laetare Medal is not the same as an honoree degree I decided to explore why Dorothy Day accepted the award. The story gives some insight into the thinking of Dorothy Day and Father Hesburg, the president of Notre Dame at the time.

What is the story behind Dorothy Day accepting the Laetare Medal from Notre Dame?

The brief answer to this question is she was never given a chance to refuse as the award was bestowed on her by Notre Dame. 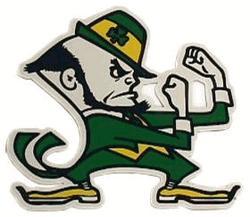 Here is the story:
On March 8, 1972 Notre Dame issued a press release for release on March 12, 1972 that Dorothy Day has been named the 1972 recipient of the Laetare Metal, the University’s highest honor.

Dorothy Day received the telegram on a sick bed in New York.
Starting immediately Dorothy received numerous congratulatory telegrams and letters from all over the country. A few of them are: March 11, 1972 from Archbishop Raiond, Apostolic Delegate; March 13, 1972 Supreme Court Justice Brennan, March 16, 1972 from President Richard Nixon.

Dorothy Day made several attempts to call Father Hesburgh and wrote him around March 14, questioning, if not rejecting the honor. She was not able to reach him since he was in Europe after the press release and traveling this country

He did write back to her on March 24th apologizing that he had not earlier responded to her letter and said he had tried to call her. He says he hopes that she would accept the Laetare Medal and how Notre Dame was not embarrassed because of the IRS suit against the Catholic Worker. He ends the letter with the statement: “Do say you will receive the Medal at it will make all of us very happy.”

On March 27, 2010, about the time she would have received Father Hesburgh’s letter, she wrote a handwritten 12 page letter to Father Hesburgh that was not sent. She said how she was trying to get a hold of him but the phone number given her had no answer. She says how the award was not really offered to her, “since that would have given me a chance to refuse it”. She said the award was “bestowed on her.” She said she was honored by the award but still thought it was in the best interest of Notre Dame, because of her status as a “tax refuser”, not to give her the award. She then goes on for many pages to talk about Peter Maurin, her Christian Anarchism and the principle of subsidiarity as why she refused to pay Federal Taxes. She describes subsidiarity to “mean each individual, each family, each parish, each local community would do what they could, before calling upon the larger authority, in this state, the Federal Government, to enter in.”

The unsent letter by Dorothy comes to an abrupt end on p. 11 and one can only speculate that Dorothy received Father Hesburgh’s letter at that time explaining that Notre Dame was “not embarrassed because of the IRS suit.” He goes on to say in this March 24th letter: “To be honest with you, the only real embarrassment would be for you not to receive the Medal.”

Father Hesburgh wrote that he could give it to her quietly at “any place of your choice” although he would prefer to give it to her at graduation.
Dorothy must have told him she would prefer to have the award “bestowed” on her quietly since on May 17, 1972 Father Hesburgh wrote to Dorothy saying “please don’t worry about not being here at graduation time. Much as we would like to have you, we most of all want you to be at ease and to receive the Medal at a most convenient time and place for you, with as much pride and as little fuss as possible.”

However, at the end the Laetare Medal was bestowed on Dorothy Day at graduation at Notre Dame. There is no known record of her acceptance speech but there is a picture of her accepting the award at the podium. Also there is Commonweal issue of that year, missing a date or issue number, in which Dorothy had written this account of her reception of the medal: 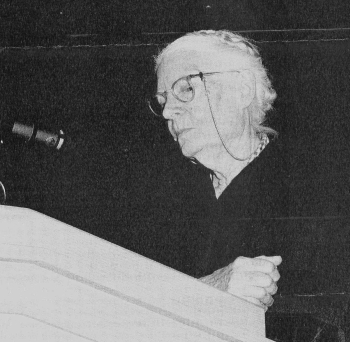 I have refused honorary degrees because of my respect for Holy Wisdom, just as much as for my abhorrence of our military-industrial-agricultural-educational-complex-conglomerate. I compromised when I accepted the Laetare medal from Notre Dame this year. Fr. Hesburgh threatened to come to First Street and present it there if I did not come to the Midwest. At the Notre Dame graduation and the conferral of degrees, a dozen or so honorary ones, I could be lost in the crowd, I thought. So I accepted and could acknowledge my debts of gratitude to George Shuster, who is assistant to the president, and Julian Pleasants and Norrie Merdzinsky who with various Holy Cross Fathers and Brothers and students kept a House of Hospitality going in South Bend for some years. The Pleasants, the Ryans, the Geisslers the McKiernans and others kept the idea of communal rural living, and intellectual work and manual labor alive all these years; and William Stotey, a professor at Notre Dame who has fed my spiritual life for many years by his set of books — Days of the Lord, excerpts from which gave me the energy this morning to sit down and write this very imperfect letter of thanks to my friends.

In summary, it is my opinion that Fr. Hesburgh, perhaps knowing of Dorothy’s refusal to accept honors from Catholic Universities, announced the award was going to be given to Dorothy without talking with her by phone or mail. She seems to have tried to refuse the award but, as she says, was not really given a chance to that, since the Laetare Medal being bestowed on her was publicly recognized before she could refuse it. She had close contacts with Catholic Workers in South Bend and at Notre Dame and did not want to embarrass them by refusing the award after it was publically bestowed on her. Also she did not want Fr. Hesburg coming to New Your to give her the award.

(Thanks to Phil Runkel of the Marquette University Archives, Peter J. Lsy of the Notre Dame archives and others for the material and picture in this article)

Retrieved from http://www.nonviolentworm.org/TeachWarNoMore/WhatIsTheStoryBehindDorothyDayAcceptingTheLaetareMedalFromNotreDame
Page last modified on January 13, 2011, at 10:01 PM